Some excerpts from it are as follows:

Anti-Ragging Measures at Symbiosis International University Ragging is totally prohibited in Symbiosis International University and in its Constituent Institutes and anyone found guilty of ragging and/or abetting ragging whether actively or passively, or being a part of conspiracy to promote ragging, is liable to be punished in accordance with UGC Regulations 2009 as well as under the provisions of any penal law for the time being in force.


As per UGC Regulations on curbing the menace of Ragging in Higher Educational Institutions, 2009, Ragging constitutes one or more of any of following acts:

i. Any conduct by any student or students whether by words spoken or written or by act which has the effect of teasing, treating or handling with rudeness a fresher or any other student.

ii. Indulging in rowdy or indiscipline activities by any student or students which causes or is likely to cause annoyance, hardship, physical or psychological harm or to raise fear or apprehension thereof in any fresher or any other student.

iii. Asking any student to do any act which such student will not in the ordinary course do and which has the effect of causing or generating a sense of shame, or torment or embarrassment so as to adversely affect the physique or psyche of such fresher or any other student.

iv. Any act by senior student that prevents, disrupts or disturbs the regular academic activity of any other student or a fresher.

v. Exploiting the service of a fresher or any other student for completing the academic tasks assigned to an individual or agroup of students.

vi.Any act of financial extortion or forceful expenditure burden put on a fresher or any other student by students.

vii.Any act of physical abuse including all variants of it: sexual abuse, homosexual assaults, stripping, forcing obscene and lewd acts, gestures, causing bodily harm or any other danger to health or person.

viii.Any act or abuse by spoken words, email, post, public insults which would also include deriving perverted pleasure, vicarious or sadistic thrill from activity or passively participating in the discomfiture to fresher or any other student.

Symbiosis International University ensures that the congenial and welcoming environment is given to the freshers in its all constituent institutes. To achieve this objective following committees have been formed by the University as per UGC Regulation 2009: 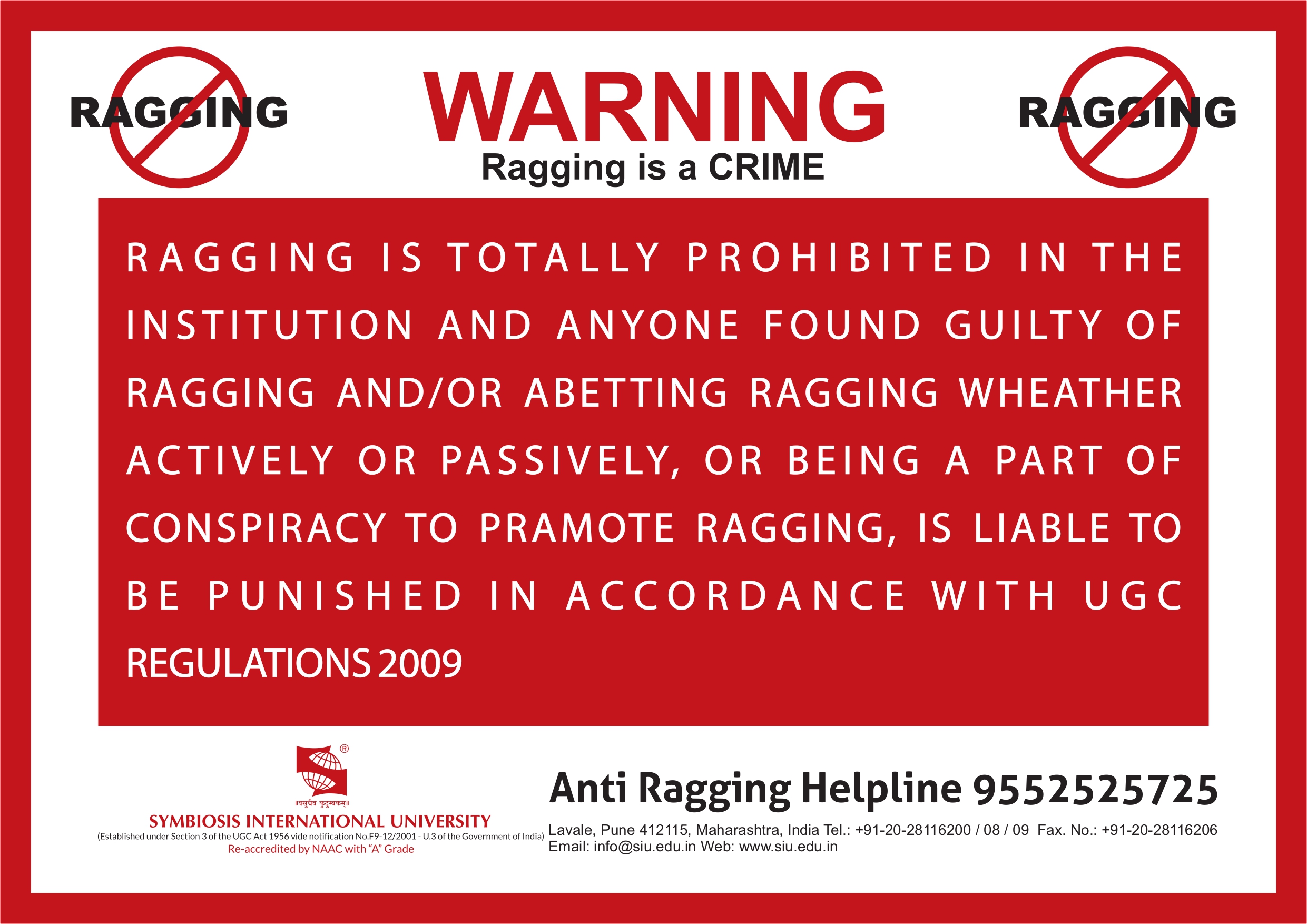 Symbiosis International (Deemed University), SIU, does not accept any Donation/Capitation Fee for any of its programmes offered by any of its Institutes. Aspirants are advised not to fall prey to any such false claims in print or social media by unscrupulous elements. This is also to warn that the propagator of such false messages will be dealt with severely and will face legal consequences.